Shortly after our move to Clevedon – and I don’t think this is a coincidence – ITV started filming an 8 part drama in the town. I believe it’s of the murder/mystery variety, but don’t quote me on that.

It’s set in the fictional Dorset town of Broadchurch, but a lot of the filming is being done here. Al and I had seen the film crews camped out in the local car park, and knew something was up, and we had been puzzled by the new shop signs up on Hill Road for the Echo. I’m a little embarrassed to admit that we had failed to put two and two together.  We left that to my daughter, Louise. 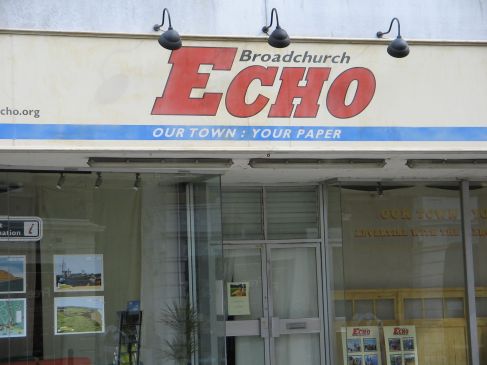 And this is what Hill Road looks like.  You’ll recognise it when the series hits TV screens next year.

I would like to say that I have David Tennant’s autograph, but that is not yet true.  We do make sure we are in Hill Road quite often, so we may be asked to take a table at the fictional Traders Bar and Restaurant, opposite the Echo.  What is the going rate for extras, by the way?

They have also filmed really close to our house, in the big old former bed and breakfast establishment just down the road from us (opposite the Morrisons’ petrol station, for those who know the town)   and also in a new house off the Western Road.

I shall have to watch the series twice: the first time checking out the locations and then again for the story!

Clevedon is apparently used for filming quite a lot.  The old town is quite picturesque, being based around tree lined hills, and with quite imposing housing from the late Georgian and Victorian eras, so it has a lot of interest to the eye.  It has also not been brought too far into the 20th Century (no typo there!) so has a timeless quality to it.  And finally it is not too much of a tourist destination, so film crews can get on with their business without too much interference from the public.

Why isn’t Clevedon a tourist destination?  Well the coast is beautiful and rugged, but there is no sand,  We are on the Bristol Channel, so we have soft mud and stones beside the sea.  You don’t find sandy beaches until you get further down the coast towards Weston-Super-Mare and Burnham-on-Sea. Amusements are restricted to a small area with arcade machines, fish and chips and ice-cream.  Although we do have a mini train and occasional donkey rides on the Salthouse fields, this is not enough to bring in coach loads of visitors.

Although we do get coaches at the pier, transporting passengers for trips on the Waverley and Balmoral.  More of this later, I think.  I don’t want you getting over excited!