Just got my new glasses this week and it has been time to move to varifocals.  Another milestone in life! 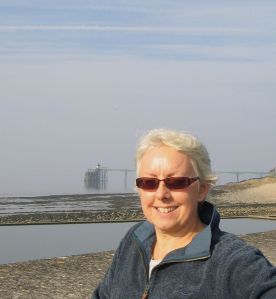 Here’s me in the glasses with Clevedon pier behind me.  It was very bright, even with the light sensitive lenses, so it’s a good thing you can’t see my eyes squinting.

I’ve worn glasses since I was 11, although I probably should have worn them for a couple of years before that, as by the time I got my first pair I was already very short sighted.  If you’ve always had good eyesight it must seem strange to think of people not realising they can’t see properly but you are just used to things as they are:  and especially for a child you have nothing to compare with.  So you manage, and if you can’t see the television, you sit closer, and if you can’t see the board at school you make do with listening, and probably have the teachers wondering if you are a bit of a slow learner.  In my case, my parents realised I was short sighted when we were parked outside a shop and my younger sister proudly read out the name, to which I scathingly said – you haven’t read that from here, you’ve just remembered it.

So a short time later,  I was the dubious owner of glasses.  Well, it was good to be able to see!

Either just before I went to university, or maybe while I was there, I switched to lenses.  Strange that I can’t remember exactly when. I used the old hard lenses first, which took an age to get used to and hours of pain and pink eyes, and then to gas permeables.  I’ve been pretty happy with these until the last four or five years, when I have begun to need reading glasses as well as the lenses.  Ah yes! How unfair that as you age and your eyes change there isn’t a golden time when your sight is briefly perfect.  Instead you become simultaneously short and long sighted and that’s how it’s going to be until you have no further need of optical aids of any kind!

I may well move on to varifocal contact lenses, but have decided to stick with glasses for a while and see how I get on.   At least if I go for the modern lenses I will be able to switch between lenses and glasses as I wish.  The additional issue with gas permeable lenses is that they change the shape of your eye, so sight with glasses was not the same as sight with lenses.

What I am reluctant to contemplate at this stage is laser surgery. It just seems so drastic to me, and the eyesight I do have is very precious!